1A "How do your products use or challenge conventions?"

We decided to create a music video with a band, Bring Me The Horizon, which is in the genre of Metalcore, alternative rock. However, the band hasn't always been assosiated with these genres but also, death metal, alternative metal and post-hardcore.


There are loads of general conventions that can be found in music videos. These include:

I created a video, which references to the old "Top Of The Pop" videos, where i am in this case referencing to the "Top 10 common conventions in music videos"

The vodcast below I created to be able to show more on screen what I did. I am not only talking about common conventions in this one but also our genre specific conventions for our metal core genre.

Below you can also find some more writing on what we did.

The costume of "Weird Al", helped to make the clear reference to Michael Jackson. Michael Jackson was known for a lot of things, such as his dance routines, his changing from black to white etc.

However, the dressing style of Michael Jackson before he died was the typical leatherjacket with buckles on it and also the typical boots. So before even seeing the face of "Weird Al", we know that it is the video will be making an intertextual reference to Michael Jackson.

We have some intertextual references to several music videos, which we have gotten our inspiration from. One of them includes the reference to the color powder in the music video by the band 30 Seconds To Mars, track Up in the Air.

However, we quickly discovered that it would be very hard to get so many people together, especially because the first throw we would only be able to film once in order for them not to have color powder on their whole body for the sake of continuity.
Therefore we decided to have the color powder thrown at the male protagonist, the drums and we might still throw it at some of the band members, because it has become so popular and we got a lot of good feedback for it in our audience feedback sessions.

Another intertextual reference is the one we have for our underwater pool scenes. This we got from two different music videos. One of the videos is by the band Panic at the Disco for their track This Is Gospel. Whereas the other video we were inspired from is the video by Naught Boy ft. Beyoncé for their track Runnin'.

These are images of the two different music videos. The 1st picture is from This is Gospel, where the leadsinger is under water. This was filmed inside a box. At the beginning we intended to film our underwater scenes in a bathtub like this (left). However here again we found out how difficult it would be, because it would be hard just to have a GoPro stuck in a small bathtub with the leadsinger and it wouldn't look half as good as if it was in "open waters".

This is when we came up with the idea for a pool, which we as mentioned above, got our inspiration for from the track Runnin'. We didn't have an open ocean around Luxembourg and it was not summer, but we did have a heated pool and could put some effects on it so that it would look more ominous than the usual light pool blue.

This is the result we ended up with. We filmed under water with the waterproof GoPro and were able to see it at the same time due to the advantage of the newer versions of the GoPro having a screen where you can see what you record. We got shots of the pool empty and the pool with our male protagonist in it and we think it worked really well and managed to connote the darkness of the lead singer and his dark thoughts and that he feels as if he is drowning in his own sorrows and thoughts.

Bronwen has a detailed post on the This Is Gospel video, whereas I created a post on Runnin'. In my post: reflection on pool shoot, you can read more about the intertextual reference.

Another intertextual reference in our music video is the one to Twenty-One Pilots track and music video for Ride (top right picture). We thought that it had a really nice natural effect when having the instruments outside, than having our band play in a normal studio with a green screen background.

Some challenges we faced in the woods included our re-shoot and the fact that it was really cold outside, since we were filming during January.
When doing the re-shoot, the instruments had to be placed on the exact same spot, for sake of continuity, and it was becoming really cold for our band members, because they were (most of them) only wearing T-Shirt and/or thin jumpers for mise-en-scene. So when we filmed someone like the drummer on his own or the keyboarder, or the drummer with bass guitar etc. the other's were sitting inside a car so that they wouldn't cool down entirely. Despite the challenges faced, we are very happy with the result, since a lot of the audience who watched it, like the fact that it was outside in the woods and were impressed with the fact that we had taken all of the instruments up there for the purpose of our music video.

Below you can find a video, which I created a post on at the end of March. It refers to videos where we got out inspiration from and what we did. I thought it would really allow to compare and contrast and supports Kristeva's argument that media texts are based on other texts. (intertextuality)

Firth explained that music videos may be characterised by 3 main types; performance, narrative and concept. Performance is a video that shows the star in one place or the studio, which is often used to just have the viewer listening to the soundtrack rather than "just" watching the video. This allows a form of escapism (uses and gratification's theory) to the listener. Narrative is when the video is telling some story. There are 2 types of narrative fragmented and linear. Concept music videos all rely on a poetic form, most commonly a metaphor. Instead of telling a story in linear form, a conceptual music video created a feeling to be evoked throughout viewing it. Each viewer may have a different feeling or opinion on what emotion has been created, as a metaphor can be in interpreted in different ways.
In our music video we have performance of our band in the woods, which we were inspired by from Twenty One Pilots music video for their song Ride. More detail about this you can find in my vodcast. 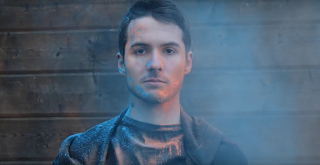 Andrew Goodwin explained that one of the 6 common features in a music video is the star image. The star image is when there are a lot of  camera shots making the central protagonist the centre of attention.
In our music video we definitely have a big part of that feature since we have loads of centrally framed close-ups of our leadsinger Wayne, not just in one but many different locations. One of the particular shots, which contains star image is this one on the left, which we included 3 times in our music video and ofcourse also the close-up shots of our lead singer with a green screen background where we layered a color smoke effect onto it.
Another feature is the link between visuals and lyrics, which we defintely also have in our music video. As mentioned above, we were inspired by This Is Gospel and Runnin' for our pool scenes. However, the only reason why we got this idea in the first place was because the lead singer sings "I was an ocean, lost in the open" and we wanted to establish that link between visuals and lyrics.

The next feature is a link between music and visuals. This feature I conformed to by editing to the beat. I especially tried to cut to the beat with the drums and I also edited to the beat a lot when it came to our fast paced sequences throughout the music videos. See more of this in my vodcast.

I had a really useful shot, which was just of the drummer's foot, when he is playing on the bass drum. Most of the drum scenes were really hard to edit completely too so that they looked realistic, because it wasn't always that the drummer played the right rythm. However most of the time it did work and especially with the shot above, our audience argued that it was a success.
The fast paced sequences were also edited to the beat of the track, both at the beginning of the music video and towards the middle and also there is a slower cutting to the beat towards the end of the video.

This is a video of the fast paced sequence in the middle of the music video.

This is a video of the slow paced sequence cutting to the beat of the music towards the end of the music video.

This is THE common convention and most important feature of a music video. If the lip-syncing does not achieve verisimilitude it will simply not look as good. When filming our music video we directed our male lead singer to sing out loud. He was quite shy in the beginning because he argued that he couldn't sing. However, everyone supported him and said it wouldn't matter because you wouldn't here that in the music video after anyways, and the fact that he would sing out loud would make it easier for me to edit and achieve lip-syncing verisimiltude.

Our audience might have been able to identify themselves with the female and male character due to the linear narrative of the break-up which a lot of poeple from our target audience will have experienced. Some might be able to identify especially with the male protagonist in how he is feeling about not being able to handle the pain and his sorrows anymore.

We included layering a lot more this year at A-Level compared to AS. I used layering with green screen and also layered 3 shots over each other such as the one shot where the singer sings: "beat me black and blue". In this particular shot I had layered the pool footage on to it and I had the color smoke effect and ofcourse the green screen footage of the lead singer himself.

Our music video has a diegetic outro. This we decided to create since we thought it would be a smoother ending rather than just fading to black. Our diegetic outro, consists of our male protagonist seeing the girl and taking his headphones out, when he sees her walking buy. This we thought was a good ending because it connoted that maybe he had just been dreaming all of the events in the music video or he had been thiking about her a lot and had these flashbacks.

Posted by Sophie Rasmussen at 08:17