3B "How would your products be distributed as real media products?"

I created a vodcast to answer this question. (UPDATE: THE TITLE IS WRONG BUT COULD NOT BE CHANGED DUE TO PROBLEMS WITH FINAL CUT PRO X)

This is an interview we carried out for our evaluation question 3B with a shop keeper of the shop "Le Réservoir" in Luxembourg city. "Le Réservoir" is a shop that used to sell only vinyls and CD's but has gone into the selling of video games and comic books just like HMV (His Master's Voice). The shop keeper argued that lately the selling of Vinyl's has increased again due to people starting to collect them and it becoming trendy again. The only question that remains is: How long will this trend last? He argued that one of the main reason's why vinyl has become so popular lately is because of the deaths of so many great music stars such as David Bowie that then go into a store to buy and collect his pieces in forms of vinyl's.


This is an approximate script, which I created to guide myself through the vodcast. 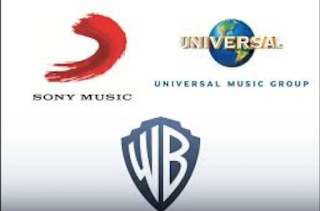 In the music industry there are what would be called the "Big 3". The Big 3 include Universal Music Group, Sony BMG Music Entertainment and Warner Music Group. The Big 3, used to be called the Big 4, when another conglomerate, EMI (Electrical and Music Industries), was a big part of the music industry. However, after having faced financial troubles in 2011, it was sold to Universal Music Group and is now a subsidiary of them.
As with the film industry, the music industry also has independent record labels also known as "indie", which are the ones that are working without any funding from an outside major record label such as one of the Big 3 or a subsidiary of the Big 3. 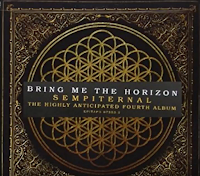 Through a lot of research into the BMTH business model of distribution, I discovered that their albums Sempiternal and their latest album That's The Spirit are distributed by RCA, which is the subsidiary of Sony Music Entertainment.
The digital access to their music via streaming services such as Spotify has been the cornerstone of BMTH's distribution. This is evidenced on their website where users are offered the opportunity to stream their music on Spotify, Apple Music and Amazon. 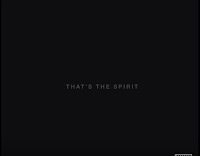 This is reflected in our own work since we included links to Spotify and Apple Music on our website, which was the same link as the real BMTH band had on their website. The awareness of our product as a whole was established through the extensive use of social media. This we also included by creating a Twitter, Facebook and Instagram, which allows the audience to stay in touch with their favorite band, follow them and see what they are up to next. It is a great opportunity for a band to advertise for their newest products such as a music video, new album, new single or even special offers on their website, which is the main reason why we included all 3 social media accounts.

We therefore focused on creating a lot of posts that said "New video out now" or "buy or newest digipack here" with a link to our website. BMTH make their fans aware about where they can buy tickets and when they are coming to different cities, which is really useful to do via social media because it has become such a big part of the music industry. Bands in general, including BMTH, often post to thank cities for showing up to their concert or they post "are you ready for BMTH tonight". Therefore, we also included this in our own project by posting "Kansas City are you ready for tonight" and then adding a link to where they could still buy their tickets.

Allthough the internet and digitisation have helped the bands by being able to establish their social media accounts, they have ruined and disrupted the main role of the big music companies. Several people do not want to buy CD's anymore, due to the fact that you are now able to download them and stream them directly from YouTube rather than having to go into a shop and pay around roughly 8£ and 13£ for each CD.
This links with the change in technology, since it has developed from vinyl's right on to the discman and the MP3 player, up to the first version of the I-Pod and now several people are listening to their music via their Smartphone, by streaming it from YouTube or using free apps such as SoundCloud and/or Spotify. People used to have to go buy vinyl's and CD's in a shop if they wanted to listen to music, whereas now you can stream the music by downloading apps to your smartphone that are completely free and allow you to listen to every music for free.
iTunes, did up until even just a year ago, still charge 0,99 Euros for every piece of music that you wanted to buy. But during the last years with the development in technology it led to a major decrease in sales from iTunes.

However, their latest invention has been to introduce Apple Music where you then pay around 15 Euros per month and can then download as much music as you want. This has allowed Apple to follow Spotify and together become huge streaming services in today's music industry.
The way we integrated this in our project was by adding the links of these streaming services to our website. Also, for question 3A, we created a video where we followed our band for 1 day and we went to a CD shop here in Luxembourg and found that the main focus was on the vinyl's  rather than the CD's. We were able to find more BMTH vinyl's than CD's.

Following the statistics of the increase in vinyl sales we were very keen to follow the pattern by having a vinyl on our website.
Our push on the vinyl front is also emphasised on our website, where we have included a vinyl that Kristian created. It is very simplistic and is based on the real BMTH's vinyl for That's The Spirit.

Our digipack was another aspect of our promo package. We have distributed our digipack on our website and it would most likely also be available in a CD shop. However, the one place where it would have the most success would be on a streamin service such as Spotify and Apple Music. 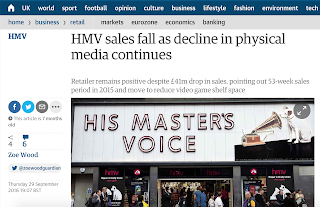 During the last couple of years physical media sales have dropped significantly, meaning that not many people want to buy CD's anymore. According to an article from the guardian the music store HMV (His Master's Voice) renewed and went into the video game market due to a decrease in physical media sales. According to an article from techcrunch streaming services grew to 317 billion song streams in 2015, which was the double from 2014 where 164.5 billion songs were streamed from streaming services.
Following the statistics of the increase in streaming services, we knew how important it would be to follow the pattern by having several streaming services, such as Spotify and Apple Music available on our website.

Another element of distribution of our brand would be through merchandising. On our website we uploaded a range of different merchandise, which we had created ourselves. We offered a large variety of merch such as T-Shirts, a vinyl, digipack, phone cases and even baby clothes. It is important to appeal to the target audience. Since our primary audience are 70% males and 30% females, we had a bit more merchandise for males than females. However, our iPhones cases were aimed more at girls due to the pinkish color in the design. However, when looking at the real BMTH website, I found that their merchandise was very gender neutral and that they had just as much merchandise for females as for males. In this way, we changed our project to a decision we made instead of conforming to the real BMTH's website.
So how else do musicians monetise their work, brand and fanbase? Well a lot of it is through public performances such as concerts, performances and interviews on TV and radio, streaming and live music.

BBFC (British Board of Film Classification), choose the ratings for physical movies, online streaming movies and music videos and is therefore part of the distribution process.

Unlike movies that have 6 different age ratings music videos only have 3. They dont have the U, PG and R18 ratings for music videos as this is not necessary. The ratings appear on Vevo online and on YouTube.

It is important that the new music video in our case Throne, would be sent to the BBFC, before being distributed. The issues the BBFC consider in classifying music videos include:

For more information about the BBFCs involvement in music videos you can click here. 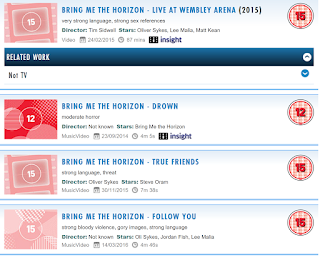 When researching BMTH on BBFC website, it was found that 3 of their videos got an age rating of 15, which was drown, true friends and follow you, whereas the rest got a rating of 12.


A major issue with the streaming from YouTube is that it belongs under the category of piracy. Music piracy is the copying of copies of pieces of music for which the artist or the copyright-holding company does not receive any money and does not give permission.
This is ofcourse also a contributor to the decrease of the money the different artists are earning in the music industry.
Streaming services such as Spotify have been a great help to decrease the amount of users pirating music. Spotify is a free music service that allows users to listen to music without paying. However, it doesn't allow users to buy the music.
So how does it earn it's money? By getting money from the users who subscribe and get the membership. Another positive thing about Spotify is that some of the money is going back to the record labels, which is then supporting them.

In conclusion our products would be distributed the same way that the real BMTH video is distributed, which is through RCA, the subsidiary of Sony Music Entertainment. Our video would most likely get an age rating of 15 from the BBFC.
However, if it were real life and counting in the fact that we are students it would highly likely be distributed by an indie record company.

Posted by Sophie Rasmussen at 08:12