WHAT WE DID APPLY: INCLUDING ELEMENTS OF COLOR BY USING COLOR POWDER/DIEGETIC INTRO/OUTRO

The song Wannabe by Spice Girls came out in 1994 and was a major hit within the dance pop genre. The music video of the girl power band is a great example to analyse because it was the first girlband and video that marked a historic break because each of these girls had their own individual look and identity.

Boybands had always been individual characters signified through their style of clothing and personality. Whereas in the first videos of girlbands, the girls were non-individuated, meaning that they each wore the same clothing, same look (e.g. hair) and didn't portray their identity in the music video. A good contrasting example to the Spice Girls - Wannabe is the song Eternal flame by atomic kitten.

In the video above, the girlband, Atomic Kitten, doesn't show any individual character's or a different look. All three of them are wearing a similar white jumpsuit, have the same length and style of hair and a similar make-up consisting of a bright glittery lip gloss and mascara.

Another reason why I decided to comment on girlbands is because Bronwen and I considered to create a minivid of a girlband. Due to this, we wanted to identify the different key features that are in a girlband video.

When comparing the video from the girl power band Little Mix that brought out the pop song Wings from 2012 or their song Hair, which was released in 2016 or the Spice Girl's video, there are a lot of similarities.

First of all, there are bright colours included in both music videos. The girls wear bright clothes, have coloured hair and the background has patterns such as flowers, which makes it even brighter and highlights the girl's faces. The mise-en-scene of the blue, pink, neon yellow and other colors highlight the typical "girlpower" slogan. 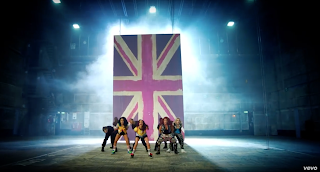 Furthermore, the location of an empty airport or hangar is often used in music videos. It is also used for the music video Up in the air by 30 seconds to Mars.
When decorated with a specific trait from that group, such as the British flag, since the members of Little Mix are all from Britain, it already takes your eyes of the hangar, focusing on the singers and dancers.


In case that Bronwen and I, create a music video with a song from a girlpower band, we will be using a lot of colors in terms of mise-en-scene especially putting a focus on colorful costumes.
Furthermore, we indtend to create and choreography, a dance routine , which is one of the 6 features of a music video according to Andrew Goodwin's theory of the specific genre characteristic. I know some dancers from the Conservatoire de Luxembourg, which is the Luxemburgish music conservatorium, that offers classes in dance and singing and that also teaches music. I intend to contact those people, once Bronwen and I have set on a group pitch and our final idea.

Lastly, Bronwen and I want to go location scouting in a butterfly garden and use colour powder in our music video, that you use for the famous colour runs here in Luxembourg.

Posted by Sophie Rasmussen at 13:33