POSSIBLE INFLUENCES: FILMING THE PERFORMANCE IN THE RAIN

What is interesting to note about this video however, is that it isn't the original video that was created by the band but by a girl called Nanalew on YouTube. 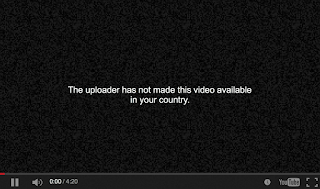 However, Awolnation have created an original video for this, but it isn't available in Luxembourg and so I haven't been able to analyse the original one. The unofficial music video for Sail might "just" be Nanalew's own interpretation of the song and not what the band actually wanted to say with the lyrics. I have tried to contact Nanalew over the e-mail she has assigned on her YouTube channel. However, she hasn't replied yet and so I intend to update this post as soon as I get a response.
According to a website where a woman talks about the official music video, it sounds as if the original is completely different then this one. However, I did decide to make a note of it, since I believe that there are a lot of usefol elements in here, that could inspire Bronwen and me for our own music video.

The rain that is in the music video  has a really good effect of depression and sadness, which could definitely also be useful in case we decide to go for a rock song.

The shallow field of focus of the raindrops on her hand can help to denote tears and sadness, and has a really good effect. Also the close-up of her face, as the central protagonist, shows that she is clearly outside in the rain, since her face and her clothes are wet.