UPDATE: CHANGE OF TRACK BUT KEEPING THE SAME TATTOOS AS THEY FIT INTO THE SAME GENRE 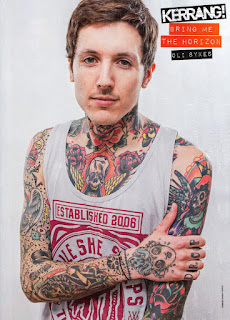 As tattoos are a very common feature of rock bands, and as we wanted to achieve verisimilitude, we decided to have tattoos on the band members.

When first designing the tattoos, I took a lot of inspiration from the lead singer of Bring Me The Horizon, Oli Sykes. There were a few tattoos that i saw very often on singers or band members such as:
- Roses
- Crosses
- Skulls
- Instruments/something music themed.

I also took the lyrics of the song we are using (Follow You) and found some phrases that I could base a tattoo of.

I immediately saw the word heart and was inspired by that to draw a realistic heart. I drew the designs in biro as it allows small detail and creates a similar effect to that of a tattoo.

After having designed all of these tattoos and drawn them out, i began testing the paper we had bought to make the tattoos temporary, as my previous attempts had not worked properly.
I drew a very simple sun design on word, and then printed it out 5 times onto the paper. I tried a few different methods, the one I found on the internet, and one that was on the packet of the paper.
This was moderately successful, although there was still a strange plastic texture to the tattoo. I tried again a couple of times and found that if i used hot water, and dampened the tattoo often it worked fine.

I then took all of my on the day of the shoot. 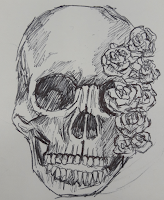 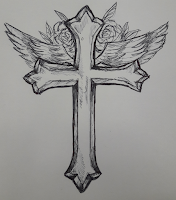 Posted by Sophie Rasmussen at 18:47

Email ThisBlogThis!Share to TwitterShare to FacebookShare to Pinterest
Labels: Mise-en-scene