After having changed our track and the idea for our performance and narrative, we have new pictures for the digipack. We also had to find two new band members due to one drop-out and timing. Right now we are working on what pictures should be on our digipack but also, which other elements are usually included on a digipack.

For the front cover, we were thinking of having a picture of the entire band rather than just having the leadsinger and including the name of the band. This is not the finalized version of the front cover, since we still want to work with color correction of the picture to make the color's stand out even further. 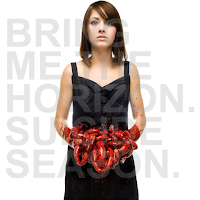 Another possibility for the front cover would be to take a picture in the green screen room with just the leadsinger in the shot, with his microphone and then layer on top of it and add the title of the band and/or the album. This would be inspired by BMTH album for Suicide Season.

Another important elemt of a digipack is the track listing. BMTH That's the Spirit album has 11 tracks, therefore we thought we would include these on the back cover.

To achieve verisimilitude on our digipack it is also important to include other features such as the record label, produced by, copyright details, barcode and serial number. On most digipacks, the barcode is on the back cover, hence we have decided to put it down in the corner on the right side. 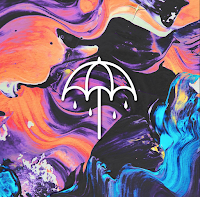 Inside the digipack, we wanted to include some more colors such as BMTH did on their That's the Spirit album inside. We thought that we could do it by having colorful ink in water that looks a bit like colorpowder. Since color powder is also a part of our music video, we thought that we would want to include that.

When doing some research on digipacks, I found a website, where it is possible to create and design your own digipack with fonts, pictures etc. Once we have all of our ideas sorted and photoshopped, I wanted to try and create one with the use of this website. If it turns out really well, I intend to order it.

Posted by Sophie Rasmussen at 12:16