Kristian and I went to shoot the pool scenes in a pool here in Luxembourg. For this we decided to use a waterproof GoPro so that we could not only get shots of him falling into the water from above, but also underwater. The underwater scenes turned out as the best ones in our opinion, which is also the reason for why we have included so much underwater footage. In conclusion, the shoot turned out quite well and Kristian and I were really happy with what we filmed that day.

We got our inspiration for the underwater footage from two main videos. One of them being MVid EG9 - Runnin' by Naughty Boy ft. Beyoncé on my blog and the other one being This is Gospel by Panic At The Disco, which Bronwen blogged on.

After having looked at these two videos, I quickly came to the conclusion that we had to work a lot with special effects for the water to look like an ocean and more ominous rather than a general light blue pool. The picture you see here on the left, is the footage without any effects added yet, whereas the footage below is after I added effects. 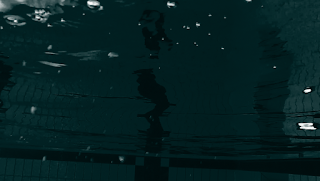 In Final Cut Pro I therefore decided to use one of the color effects called Tint. I had also worked quite a lot with the Tint color effect at AS and had a good experience with it. Hence I decided to go back to this special effect and work with it.
The bubbles that automatically appeared because I was underwater also had a really nice effect and gave an "extra touch" to the shot, rather than it just being shaky underwater footage.

When working with Tint, it was really important to change the color and work with the amount of Tint there should be in it. If I hadn't changed the color it wouldn't look at all like it does above, since it would really have turned very dark blue and not have the desired effect of an open ocean. 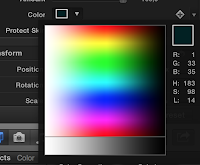 Due to this, I went for a very dark blue/green color that made the water look very dark. It took me a while to discover which color to use however after a while I found that this was the right one. We also got good audience feedback for it, because in Rough Cut 1, I hadn't worked with any special effects yet and our audience argued that it was to plain and that they wanted to see a lot more special effects, especially for the underwater footage.
Posted by Sophie Rasmussen at 11:55