Today, we had a photoshoot with our band members and I wanted to put up the new pictures and edit our website.

In the links list called "About the Band", I made quite a lot of changes. Firstly, I added the new pictures of the band members and in the near future I also intend to add a small bibiliography or quote from the individual band member. Also it says "About the Band" on the top of the page, where Wix had invented a small text below the title for it to look more realistic. My job has been to change these texts including the band bibliography and the official website text. Today I therefore changed the text beneath the title and I added the new picture of our band.

The text says the following: In 2004, Sykes formed Bring Me the Horizon, a band which rose to fame very quickly. The band released their debut album Count Your Blessings in 2006. Their second album Suicide Season was released on September 29, 2008 and their third studio album There is a Hell. Believe Me, I've Seen It. There is a Heaven, Let's Keep It a Secret on October 4, 2010 and they released their fourth studio album Sempiternal on April 1, 2013 which feature the new member Jordan Fish and Sykes playing rhythm guitar for the album and they released their fifth studio album That's the Spirit on September 11, 2015. 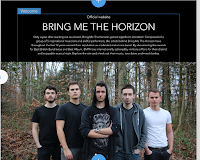 Furthermore, I decided to change the layout of the first page of our official website, since I thought that it was difficult to read the white font on the picture of the band but even with just the logo behind it. Therefore I ended up with a black background where the fond is easily readable and you can see a picture of the band with all of it's band members. The text says:

Only a year after starting out as a band, Bring Me The Horizon gained significant attention! Composed of a group of 5 inspirational musicians and skillful performers, the artists behind Bring Me The Horizon have throughout the last 12 years earned their reputation as a talented metal core band. By also winning the awards for Best British Band twice and Best Album, BMTH are internationally admired by millions of fans for their distinct and enjoyable musical style. Explore the site and check out their music, tour dates and merch below.

I also decided to add a gallery with a scrolling through rather than just that one image. Now there are images of the band that automatically appear and change after a few seconds, but also it is advertising for the newest merchandise. I put a picture up of the new merchandise (white T-Shirt), where I then added a link that the audience could click on and would automatically be re-directed to the merch site.

In the future I intend to add a picture of an upcoming concert, where the audience can click on one button where it says "buy tickets here", that then re-directs them to the official BMTH tour dates and places they can buy tickets. I believe that small tricks like these make the website appear more realistic and can also attract a wider audience.

Posted by Sophie Rasmussen at 23:29