Bronwen wrote a treatment for the idea for our music video, whereas Sophie applied the pictures and theories. The treatment is something that could be handed out to people when presenting a vodcast or spoken explanation of our idea. 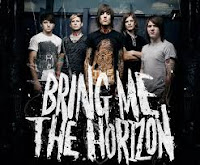 We are creating a music video for the song ‘Follow You’ by Bring Me the Horizon. Our group consists of Bronwen, Kristian and Sophie. The brief of our project is to create a music video, a website and a digipak.

SUMMARY:
To summarise our idea, we will combine both performance and concept and will also include some aspects of a fragmented narrative. We are going to have the band performing in an abandoned location and also outside. We will also have the lead singer in other locations such as a bathroom and bathtub. There will be a female protagonist who will actually be a ghost, and we will achieve this through different editing techniques such as layering. The lead singer will slowly grow more and more crazy, thinking about the girl. The female protagonist could actually be someone in his life who passed away or just be representative of a relationship ending. We will use colour powder and black balloons during certain scenes.
INSPIRATION:

We took inspiration from a great variety of music videos by various artists and genres. As examples, we were inspired by the use of colour in Up in the air by 30 Seconds to Mars, where they use color powder and in Bagboy by Pixies, where there are colored cereals in the bathtub.

We were also inspired by Joe, a previous media studies student from our school, as we really liked his use of layering, where there is a clear link between visuals and lyrics as well. We want to use one of Andrew Goodwin's suggested features of a music video, which is too establish a clear link between visuals and lyrics. There is one scene, where our leadsinger sings "Cross my heart and hope to die", where we will get a Pig's heart (achieving verismilitude) and have him squeeze it to connote his pain.

As the mise-en-scene of our music video will be crucial in obtaining a professional and believable final product, as well as achieving verisimilitude, we put a lot of thought into it.
For the mise-en-scene such as costume for our band members, we got inspired from rock bands such as ofcourse Bring Me the Horizon themselves, THE 1975, My Chemical Romance and Fall out Boy, whose logo you can see here on the right of the post.

Ofcourse, we also needed students who could fit the role and who had some experience with playing an instrument. Therefore, we held casting sessions where we filmed students from our school and outside of school as well in order to get a variety and have students/people who fit together as a group and are keen on doing the project with us. We had advertised for this via social media such as Facebook and had found males who were very keen on taking part as a band member. We will discuss, who we are choosing as our band members in our Podcast 2.

We will dress the members in black ripped skinny jeans and black jackets, ripped t-shirts and black boots such as Doc.Martens/sneakers such as all black Converse or Vans. The lead singer, and also perhaps the female protagonist will have skull face paint on their faces, inspired by the TV show, American Horror Story. Some members will be wearing eyeliner and we have also ordered some materials in which we can create temporary tattoos to put on the band members necks and arms. 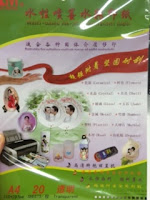 Bronwen will design and draw these tattoos as she is an art student who has designed tattoos before. In order for the tattoos to stick, we ordered "water based-ink-jet-water transfer paper" from Amazon, which can go into the copy machine and be printed out with nice tattoos that Bronwen will draw by hand. The tattoos, will be based on what the Bring Me The Horizon band members have and also other rock bands such as You Me At Six, but mainly Bring Me The Horizon. This means that they will contain tattoos such as a skeleton, cross etc, which we will be evidencing on our blogs soon.
The female protagonist’s makeup and outfit was inspired by the female characters in the Fall out Boy song, My Songs Know What You Did in the Dark. She will be wearing black skinny jeans, a crop top with some cleavage and a leather jacket. Her make-up will consist of dark, smokey eye makeup, mascare and a dark red lipstick.

In our investigation of target audience, we found that the main audience of alternative rock like the song Follow You, is males aged 16-25. This means that the video also should appeal to a male audience (Laura Mulvey, male gaze theory), which is why she will be wearing those type of clothes.

DIGIPACK + WEBSITE:
On Sunday, we have our first shoot, where we will also be doing a photo shooting with the band members, which will most likely be the cover of our digipack together with a logo of the band that we will create ourselves. We will do a post shortly, where we will be investigating for different fonts that fit into the genre and could potentially be used for our digipack.
On Monday the 17th, we will be creating our website for our band and start setting up our social media accounts.
Posted by Sophie Rasmussen at 09:42