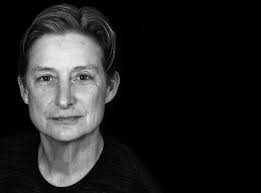 Judith Butler (born February 24, 1956) is an American philosopher and gender theorist whose work has influenced political philosophy, ethics and the fields of feminist, queer and literary theory.

Butler is best known for her books Gender Trouble: Feminism and the Subversion of Identity and Bodies That Matter: On the Discursive Limits of Sex, in which she challenges conventional notions of gender and develops her theory of gender performativity.

Judith Butler questions the belief that certain gendered behaviors are natural, illustrating the ways that one's learned performance of gendered behavior (what we commonly associate with femininity and masculinity) is an act of sorts, a performance, one that is imposed upon us by normative heterosexuality.Indeed, Butler goes far as to argue that gender, as an objective natural thing, does not exist. Butler states that: "Gender reality is performative which means, quite simply, that it is real only to the extent that it is performed. Gender, according to Butler, is by no means tied to material bodily facts but is solely and completely a social construction, a fiction, one that, therefore, is open to change and contestation.

Posted by Sophie Rasmussen at 14:52