To interact with audiences bands now have their own Social media such as Twitter, Facebook, Instagram and YouTube. To get an idea of what colors, fonts and styles where used im looking at different bands in the same genre.

Bring Me the Horizon: 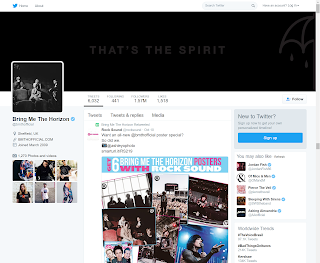 What can be seen in both of YouTube and Twitter homepage is that black is used for both of the profile banners. The banners also have to logo but the Twitter logo is to the right and almost invisible along with some text in the center that says "THAT´S THE SPIRIT" That is equally as visible as the Logo.

On the YouTube homepage the logo is in the center of the banner and instead of being barely visible it is white on the black background. 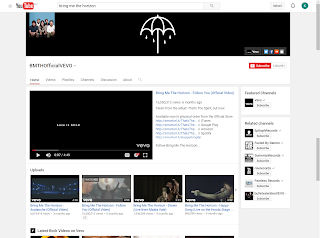 Both the pages have a photo of the band but there are some differences. The Twitter Photo has the band sitting in what looks like a cinema.The singer is siting in the center frame while the other band members sit scattered around. Some are wearing hoodies and they all look serious. The photo is also black and white.

The YouTube photo looks very different to the Twitter Photo. The YouTube Photo has the band sitting together looking at the camera. The main singer is still in the center but the other band member are sitting right next to him. The photo is also not in black and white but instead has a light blue background. The Band are also wearing different clothes as they are wearing T-Shirts or jumpers. 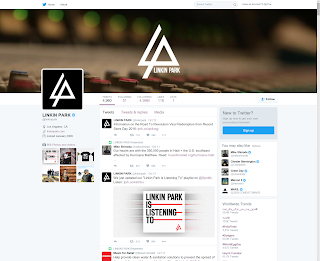 Linkin Park has a different style then BMTH. First both the YouTube and Twitter banner and profile picture are the same. Instead of having the band for the profile picture its just the logo with no text.

The banner has the logo in the center with band name underneath. In the background there is a picture of what look to be a music soundboard that is out of focus. 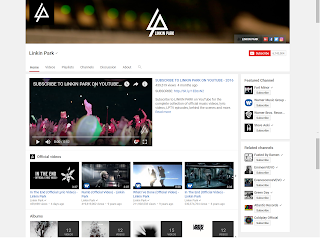 page. The related channels are other artist they have worked with and also their label company. 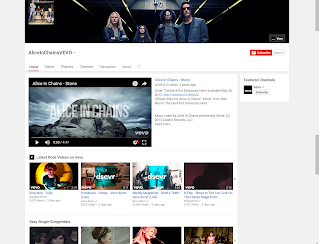 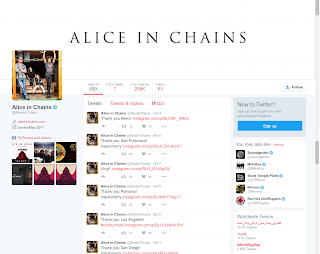 Alice in chains properly has the most different banner and profile picture out of the 3 examples. The YouTube banner has the band standing in what looks to be a car park or something of the sort. The band members all have long hair and are wearing black clothes. The main singer is looking at the camera while the rest of the band is looking straight ahead.

The Twitter banner is very different as it is a white background with the name of the band in all caps written along in black so it really stands out.
Posted by Sophie Rasmussen at 14:16