Lady Gaga is known for her famous videos to be filled with symbolic signs and filled with hidden messages. Stuart Hall would say that the audience decodes the music video in different ways because it is so open to interpretation. However I would describe her latest video for her song Bad Romance as very dark by symbolically depiciting Gaga as a sex slave.

Bad Romance is the first single out of Gaga’s Fame Monster album. Looking back at her previous songs and music videos works, the main message is that she is willing to do anything, to obtain fame.
I interpret the video as Gaga being a willing victim in the music industry’s shady inner-workings. She wants to live a Bad Romance with the abusive, cruel and satanic music industry. Even if she is aware of its flaws she still desires to be part of it more than anything else.
She is a Fame Monster and "feeds" off of fame. This is the intertextuality that could be linked to the title of her album.

She’s a sex slave and apparently, she likes it. She knows that the industry is ugly but she still wants in. There is a sense of sadism, as she seems to know that this love (of success in the music industry) will hurt her and treat her badly, but she doesn't mind it. 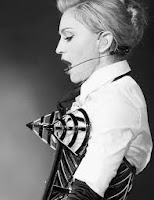 The BH that Gaga is wearing in this shot is similar to the BH of Madonna designed by Jean Paul Gauthier. According to Stuart Hall the dominant audience may interpret this as an intertextuality to Madonna. However another audience born in another age may also interpret her look as being similiar to the one of Amy Winehouse.
There is a skeleton that is decaying next to her, which could be an intertextuality for the "Queen Madonna" is out, long live the new queen Lady Gaga.

In the beginning of the music video, there is a coffin with monster written on it. This could refer to her album Fame Monster and how she is desiring fame and how fame might be the end of her career because she is "drowning" in fame.

Since Gaga is a post feminist she would be likely to disagree with Laura Mulvey's male gaze theory. In her opinion, her way of dressing and her performance in her video  is to empower her and gives herself a sense of freedom. Talking about her costume her clothes are very revealing which would according to Laura Mulvey be to attract a male audience. She is shown as a sex slave of the music industry and the men watching her in an intense way are connotation for the music industry.

This video provides us with evidence of what has become normative to us in our everyday life. A normative are stereotypes that have been repeated over and over until we consider them to be normal, hence a normative. For example russians and vodka.

Posted by Sophie Rasmussen at 12:01