WHAT WE DID USE: COLOR POWDER + FLICKERING BETWEEN SHOTS

With their 8 seconds long video, 30 Seconds To Mars, created quite an interesting set for their song Up In The Air. It is not the typical type of video with a narrative but more a music video with performance and other pictures that may have significance to the band.

Throughout the music video there isn't a narrative but more "random" pictures of a lot of different people such as a girl here on the left who is wearing a very simple grey strapless dress, with her hair up. The simplistic costumes pulls the focus on her colorful make-up and the background that included several small colorful dots. This is a reference to 30 Seconds To Mars 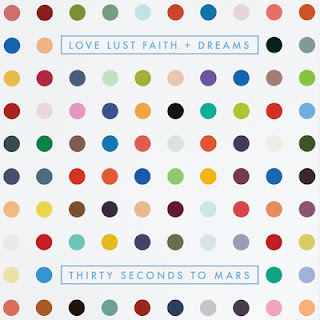 Digipak, which was probably done on purpose to establish a clear link between video and digipak in order to create a sense of branding. Also the name of their album is "Love Lust Faith + Dreams", which is what the 8 second long music video says with a female voice at around 30 seconds.

In the clip that I have screen recorded (see below), you can also see the fast paced sequence which was another element of this video that I really liked.

UPDATE I decided to include such a fast paced sequence in our music video for Throne.

Posted by Sophie Rasmussen at 11:27