For audience research I will be looking at some magazines that have featured Bring me the Horizon. Then I will look at the genre for those magazines and that will help use determine who the target audience is for the band. 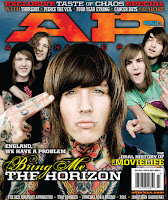 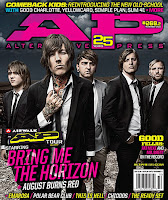 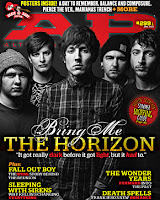 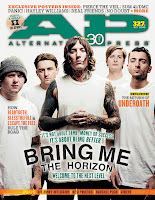 Bring me the Horizon have featured on the cover of AP (Alternative Press) many times. You can see from the photos that they have features in issue #248, #268, #299, #327, and more. By looking at APs Website I saw an article that was tilted "18 tattoos that will send chills down your spine". This tells me that the age range is centered at around 20 year old as they are the ones who generally get tattoos. Other bands that have featured on AP are such as "Twenty One Pilots", "Crown the Empire", and "Panic! At the disco".

BMTH have also been on the cover of Rock Sound a few times. Other bands that have featured on Rock Sound are bands such as "Twenty One Pilots", "Green Day", "30 Seconds to Mars".

Rock Sounds age range is slightly lower than AP as Rock Sound features some bands that arnt as heavy such as "30 Seconds to Mars". Although on there website there is mentions of alcohol which is 18+ in England. The age range of both magazines i would say is around 18 to late 20s, but AP focuses more on a heavy metal group.
Posted by Sophie Rasmussen at 09:05