WHAT I USED: CLEAR SENSE OF BRANDING THROUGH USE OF SOCIAL MEDIA - BANNER ESPECIALLY IMPORTANT - MAKING LINK TO DIGIPAK

Social Media accounts are nowadays the best way to keep in touch, and keep your target audience informed about what is currently happening e.g. new merchandise out, tour, where fans can by tickets, when there has been a release of a new single etc.
It is a great way for bands to sell themselves to their fans and let them know what is happening in their lives right now. This let's their fans/audience get an insight to their life, which is very often what keeps them interested into a band.

For my analysis of metalcore branding on social media, I decided to look at the three bands: Slipknot, Bullet for my Valentine and Asking Alexandria, since they are the same genre as Bring Me The Horizon. 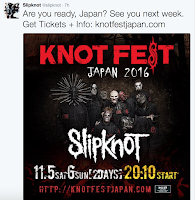 Like many other bands Slipknot use their Twitter account to let their fans know when and where their next show is. With a tweet like the one on the left, they let their fans know where they can by tickets, and tweet a picture of them on a poster with the date and the time of the venue. As mentioned above this is a perfect way to get in touch with most of their fans. With their over 1.70 million followers, that get a notification when someone they follow tweets something, they reach people over the whole globe only within a few seconds, rather than it being on posters on the streets, where people often just walk past it. 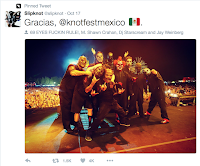 By then tweeting a picture of themselves in front of the audience they played for in mexico, they include their fans in their tweet. The "gracias"(thank you) is a little touch, which then makes the fans seem special, because the band thank them in a special way and include the language from the audiences home country. 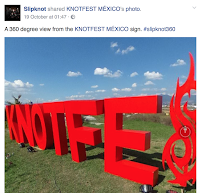 On Facebook, Slipknot have more posts than on twitter. However, some of the posts are still the same such as the one where they tweet "Gracias @knotfestmexico". Whereas other posts such as this one on the left are different. This post that has been combined with a picture, let's their fans know that they have reached the KNOTFEST and that they are now in Mexico. This gets their fans excited, because they know that they are in the same area as their favourite band.

Both of the banners on Facebook and Twitter as seen here on the left are the same. A paculiar thing to note about Slipknot is that they haven't used their digipak front cover as their banner or profile picture, allthough that is something that many bands do.

Bullet for my Valentine: 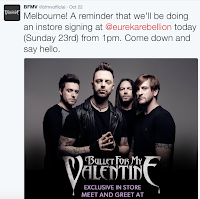 With their 321K followers, Bullet For My Valentine aren't as popular as Slipknot or Asking Alexandria on Twitter. However, the band uses Twitter and the rest of social media in the same way as Slipknot, which is to promote themselves. In this particular tweet, they did for example advertise for a meet and greet that their fans could get with the band. Again, the tweet indicates the place, the time and the date of where it will be taking place and what exactly will be happening. If they wouldn't post this on social media, there most likely wouldn't be as many fans as there are with when they tweet it like this. 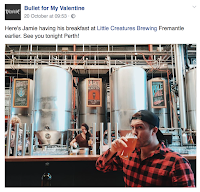 This would also explain why they have a lot more posts on Facebook compared to Twitter and Instagram. On Facebook they do also share their personal experiences such as one of them having breakfast. Again this makes the fans feel as if they are part of their life and it interests them to know what they are doing.
Also they then write "See you tonight Perth" as a reminder that they are playing a concert tonight and reminding the audience who still wants to go that they might still be able to attend.

Same as with Slipknot, BFMV have the same banner over their social media accounts. Again, this is to establish a clear sense of branding throughout. What is also interesting too note is that their top banner consists of a red writing where it says "Don't Need You", which refers to their single that they released for their album "Venom". It was released in November and has since been their banner. This again establishes a clear sense of branding with a reference to their album. 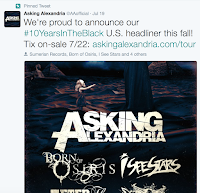 Asking Alexandria are also a quite famous band with their 1.02 M followers on Twitter. On their tweets such as the ones on the left, they have the title of their band name and then the titles of the songs from their album "10 years in black" below. 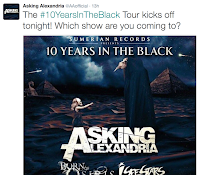 In the first post, they again as the other two bands advertise by telling their fans when tickets go on sale. This is a quick and efficient way to advertise for tickets, which will reach all of their twitter fans withing seconds by getting a notification on their smartphone. This is also considered easier for fans, since they do not need to go online and find out when the ticket sales start. With the tweet they have also put a link to their website where you can purchase tickets and see what dates the different concerts are on and in which place.

By then tweeting later "Tour kicks off tonight!" they are providing fans with the message that tonight their tour starts and they might still be able to get tickets if they haven't purchased them yet. Also, asking fans a simple question such as "Which show are you coming to" makes them feel as if they can interact with the band and talk to them directly to tell them where they are going and that they can't wait to attend the concert. 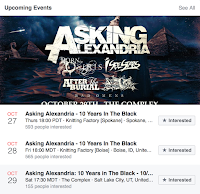 Ofcourse they also use Facebook to reach fans, since they have over 5 million likes on their facebook page. This means that with the use of different social media they can reach their fans that maybe only have one of the social medias they post on. By adding something simple such as the calendar here on the right at the top of the facebook page, it is easy for the audience to track when the next concert is. The button "Interested" has then also been added so that fans can click on it and it comes up as a reminder the day that they then play the concert.

Besides that they have the same posts on Facebook as they have on Twitter with even more such as News from Asking Alexandria featuring the leadsinger of the band. This allows the band to directly address their fans by talking to them online.

The banner on AA's Facebook and Twitter are very similar, yet not the same. Also the only way in which they are referring to their digipak would be through the font that says their band name Asking Alexandria. This is also the font that they have used for the front cover of their last  6 albums. And it is the first time that they have chosen a new font, which could indicate that they are trying to rebrand. However, if it would be the case that they are trying to be rebranding there should be clear elements of this on their social media, which there isn't. 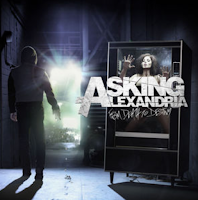 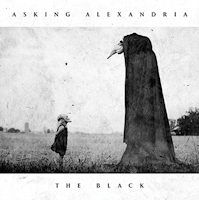 Posted by Sophie Rasmussen at 10:19