The song "Numb" by "Linkin Park" is in the same genre as "Bring Me The Horizons" "Throne" which is why I will deconstruct it so we get some inspiration for what we might want to do in our video. The video has both narrative and performance which is something we will most likely have. Throughout the video they use a filter to make everything look darker and less colorful which isn't uncommon in the metal genre. The performance clips take part in a dimly lit church with natural light and some candles. When they film the performance the camera is always moving. Most of the time it is panning so you can see the whole mise-en-scene of the church. The band is placed on a stage at the end of the church aisle. 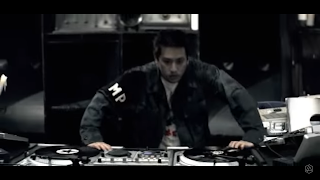 The costumes the band is wearing are black or dark green, Most of them are wearing army clothes with the DJ wearing a MP (Military Police) jacket and the guitar player wearing a tactical vest. Some of them also have earrings or necklaces and the piano player is wearing a cap backwards. All of this fits with the metal/rock genre. The main singer however doesn't fit with the stereotype of a main singer as he has white/blonde hair and also wears glasses.

The narrative part of the video follows a girl struggling to fit in in high school, This fits with the target audience as some of their audiences are going through the same. The female protagonist is wearing the same type of clothes as some of the band members, a dark green military goat and what looks to be an army backpack. You can also see that she has cuts on the inside of her arm from self abuse. 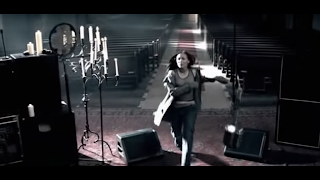