Kristian and I filmed some more narrative scenes, after having gotten audience feedback that our narrative was a bit thin, because we didn't have enough scenes of our two character's so that our audience could get to know them. 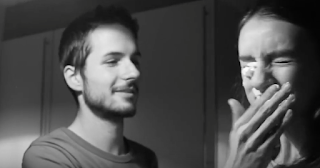 Overall it went really well, we wanted to include some more scenes of them being happy together, which we did by filming some scenes of them cooking together and smearing cream on each other's faces. It was quite hard to film, because the actor's autmatically moved out of frame, which meant that we had to film 3 scenes in total and they had  but in the end we managed.

Also, we wanted to film some scenes, where our female protagonist burns the pictures of her and her "boyfriend", because we thought that the slap scenes weren't enough, since it is only a few seconds long and we wanted there to be more emphasis on the breaking up and the negative side of their relationship, since we thought it would also link better with the dark metal genre.

For the polaroid pictures, we asked our two actors to take some selfies of themselves with out phone after, which we printed them out as the sterotypical polaroid picture. We chose polaroids because we would be able to attract a young female audience, due to the resurgance of polaroid pictures lately.