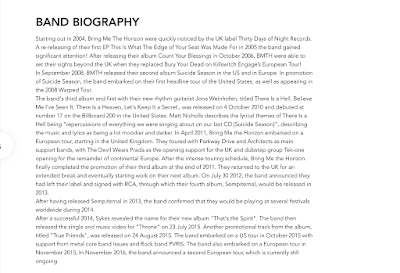 Today I wanted to work more on the texts of the website and add some things after we had gotten feedback from our teacher.

Another thing I decided to add was quotes from the individual band members. One of the reasons was because the page of the links list of "The Band" looked so bare, with just the 5 pictures and the band members names. Another reason for putting quotes was that, our individual actor's came up with them. link to our website.

Therefore, we felt that it was a nice touch for them because they got to put their quote on an official website and actually come up with something that meant something to them personally rather than us going out on the internet to find a quote that people already know. This is the

Posted by Sophie Rasmussen at 22:42