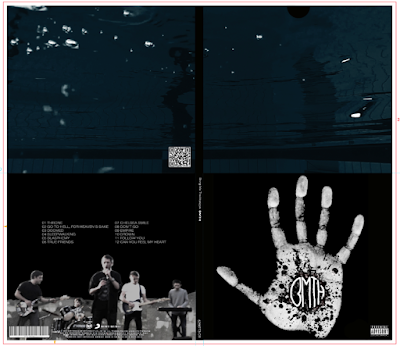 This is the first draft for our complete digipak. Bronwen used a digipak template that she found online and copied it into photoshop.

The feedback we got was that the front cover (hand), was good, but that the back looked quite clumsy in comparison to the hand, so Bronwen should change it. We thought we would then do a back cover with smoke, which I have done a post on.

The feedback from my teacher on the inner pannels was that the image doesn't look like one flowing image, so it would be better to have a single flowing image. He suggested we use a shot of the male protagonist when he is in the water, just so the picture isn't so bare, or maybe layer a band photo onto the pool shot.

Bronwen created the spine using this template rather than in a separate document. The spine was mainly inspired by the spine for "The Resistance" by Muse. She created that the spine was running from the front cover. This was because the main three examples that we looked at had this feature. She felt that it would also flow better from front to back rather than the other way around. She didn't add the logo onto the spine, as i features on the front cover and she thought the name of the band would be enough for the spine. Our spine is also very thin, since we only have 2 inner panels. Digipaks with 3 inner panels would usually have a larger and thicker spine
Posted by Sophie Rasmussen at 10:51

Email ThisBlogThis!Share to TwitterShare to FacebookShare to Pinterest
Labels: Digipack